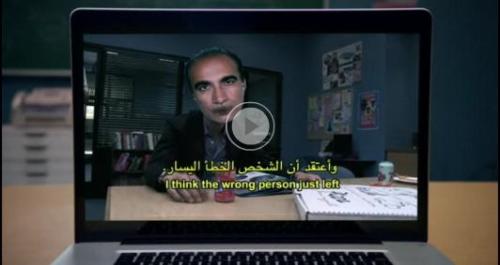 Filed under arabic, movies and shows

So there I was, looking up broccoli in Wikipedia and then clicking on the Arabic version of the article to see what the Arabic word for broccoli is. For the tiniest split second I was thrown by this: القرنبيط الأخضر أو البروكلي أحد نباتات الفصيلة الصليبية

“One of the crusader family of plants”? No, haha, it’s “cruciferous.” Same adjective.

Broccoli kitten loves broccoli. Now that’s fun. I bought some broccoli for my adult cats after seeing this video, and neither one of them had the slightest interest.

It’s true that it takes a long time to get proficient at Pashto or Urdu. But then, you could get really quite good in eight years time, if you were trained properly.

DOD doesn’t want to spend its money that way, though. It prefers to pay contractors.

“Intelligence can save Marines’ lives and give us the advantage on the battlefield,” said Cpl. William Woodall, 26, of Dallas, who works closely with translators. “Instead of looking for quality, the companies are just pushing bodies out here, and once they’re out the door, it’s not their problem anymore.”

The company that recruits most U.S. citizen translators, Columbus, Ohio-based Mission Essential Personnel, says it’s difficult to meet the increased demand for linguists to aid the 15,000 U.S. forces being sent to southern, Pashto-speaking provinces this year as part of President Barack Obama’s increased focus on Afghanistan. Only 7,700 Pashto speakers live in the U.S., according to the 2000 census.

How translators come to believe they won’t face danger could originate with recruiters.

“They’re going to tell you whatever it is to get you hired,” Spangler said.

Khalid Nazary, an Afghan-American citizen living in Kabul, called Mission Essential about a job and let an AP reporter listen.

He asked if he would go to “dangerous places.”

The Afghan-American asked repeatedly if he would be sent on battlefield missions. Barnett said he would translate for soldiers at schools, mosques or hospitals. After being pressed on the point, Barnett said the linguist would be subject to “any” assignment, and if he didn’t want the task he could quit.

“They say you’ll get a shower once a day, have access to Internet and TV, call home six times a week,” Woodall said. “And when the guys get out, they’re completely shell-shocked. They’ve been lied to.”

Habib, the translator who spoke to the AP while carrying a heavy pack in the stifling heat, said a Mission Essential recruiter originally told him that if he passed his language test, he would work out of the main U.S. base at Bagram about 30 miles north of the Afghan capital, Kabul.

“That’s what she promised me over the phone. That was attractive to me, and it was safe,” Habib said.

Once in Afghanistan, he says he was told he would lose his job if he didn’t go with the Marines to Helmand.

“It’s been very hard, very hard, physically,” said Habib, a Pashto-speaking U.S. citizen born in Pakistan who says he signed up because he wanted to serve his country.

Millions of dollars are involved. Known as Category II translators — U.S. citizens who obtain a security clearance — such linguists earn a salary that starts at $210,000 a year.

If the individual interpreters are making over 200K a year, what kind of money is the DOD paying the contracting agencies? The mind wobbles.

I wonder how much of this is due to the mindset that accurate machine translation is just around the corner or already exists. Or how much is due to the perception that DLI translators just turn out to be gay, anyway, and have to be discharged from the service.