Arabic Seen Around the Web

What a good sign, Arabic showing up in funny pics on blogs, hooray!

Filed under arabic, movies and shows

Slave Leia is Not the Only Option

A correspondent in the UAE sent in this photo of a movie poster advertising Cat in Boots. Apparently Puss in Boots is too racy. 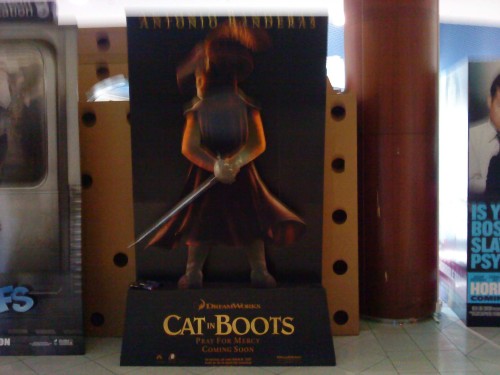 Tagged as Cat in Boots, Puss in Boots

Do you remember back in 2003 how an endangered Bengal tiger in the beleaguered Baghdad zoo was shot to death by a scared soldier with an illegal weapon because the hungry tiger was tasting another soldier? Well, they’ve made it into a Broadway play. And Robin Williams stars! As the tiger! I am not joking.

Now that this play exists, it’s difficult to internet research on the original story, even in Arabic. For instance, in the play the tiger’s name is Mamdouh. Can’t find any corroboration of that, though.

It wasn’t impossible, though. Okay what happened was some army reserve officer decided it would be a good idea to treat his soldiers to a cookout, and that a good place to roast a lamb would be in the middle of zoo full of underfed carnivores. More fantastic decision making took place that night, when a reservist decided to stand within reaching distance of a tiger. The story we heard at the time was that the soldiers had been drinking, but apparently they hadn’t drunk a significant amount. So the guy who stood a couple feet from a tiger and turned his back was sober. So anyway, as the 11-year-old tiger was munching this soldier’s arm, his buddy pulled a contraband pistol and shot the tiger dead. The snack soldier lost the use of his arm.

Sounds fishy, right? Most zoos don’t have tiger enclosures within reaching distance of the public. Neither did this one. The soldier was between the inner and outer enclosure, that is to say, in a really, really stupid place to be.

If Jurassic Park has taught us anything, it’s that we can create life and therefore we don’t need to think about wildlife conservation, because if you want more tigers, you can just whip them up in a lab.

So anyway, yeah, someone made a Broadway play out of this story.

The play, which is at the Richard Rodgers Theatre, takes place in Baghdad, shortly after “Shock and Awe.” Director Moises Kaufman says the playwright may have come up with a theatrical equivalent, as he attempts to describe Bengal Tiger: “There is a tiger that talks, there is a ghost of the son of Saddam Hussein, there is the ghost of a young girl, there are two American soldiers, one of whom dies in the middle of the play and becomes a ghost.” He concludes, “It’s part ghost story, part war play, part satire, part theater of the absurd.”

Bummer. While researching this I found out that US soldiers also killed four lions that had escaped from the zoo.

Filed under animals, movies and shows, Our glorious war in Iraq, Stupidity, War in Iraq

Dead Language of the Future

I posted this clip a few years back and it was removed from the video sharing site, but now it’s back and I’m giving it another try. I think most people gave up on the idea of copyright/intellectual property etc on the internet. Plus anyway, it’s only 13 seconds long.

Filed under language, movies and shows

Funny Pic (That Was a Good Movie)

Filed under arab, movies and shows

Please see How to Meet Muslims: a (Cinematic) Primer over at Religion Dispatches.

Short of putting Muslims on buses and driving them around the country to be gawked at, talked to, and interacted with, what more can be done?

The next best thing to a living, breathing Muslim is an approximation of one. That is, the silver screen (had you said robots, I’d counter: Muslims will be the last people on Earth to come up with robots). Why not? Movies explore the lives and experiences of Muslims in a format that can be watched as easily at home as on the train (that’s what iPads are for).

He recommends several movies. I just added one to my Netflix queue. Enjoy.

So there I was, avidly perusing the entries in the 2010 Dance Your PhD Contest, and wishing the clips were YouTube clips rather than Vimeo, since I can’t embed Vimeo competently. So I started searching on YouTube on some esoteric scientific titles, then I saw in the suggested videos one with some Arabic in the title, which I played, but it was lame, but there were more suggested videos, so I clicked on this one. And it’s pretty good. But it has nothing to do with anybody’s PhD, just a funny guy’s story of his conversion.

Meanwhile, here’s a PhD dance video about language. Unfortunately, this is only the link.

Dance as a vehicle for prejudice reduction and second language acquisition from Fuad Elhage on Vimeo.

If you go to the Gonzolabs page of PhD dance videos, I recommend my favorites (so far):

Plus check out the entry by a former(?) fellow Arabist, “The Concord of Collective Nouns and Verbs in Biblical Hebrew: A Controlled Study.”

How Movies Deal with Foreign Languages

Cracked.com has a feature, “The 5 Stupidest Ways Movies Deal with Foreign Languages.” Check it out.

Teaching American actors how to voice a sentence or two in the foreign language, now that can lead to hilarity. A while back I was watching a rerun of NCIS at my mom’s house (because it’s one of the few shows that overlaps in the Venn diagram of what my mom finds watchable and what I find watchable) and their Israeli character was supposed to try out her eleven or twelve languages on a foreign guy to see what language he spoke. I paid close attention, waiting for the Arabic. Unfortunately, I didn’t recognize it when it went by. I really couldn’t tell you what it sounded like, but after I learned that it was supposedly Arabic, I did recognize one of the words was that she thought she was saying.

Some of those are: Don Cheadle, George Clooney, Leonardo DiCaprio, and Ben Affleck(??).

Did you learn Arabic for the film?
“I don’t remember any of the language! I got to have a dialect coach there who helped with all the different Arabic dialects. It was very difficult.

My recollection of DiCaprio’s Arabic for this movie was that it was jarring to hear such heavily-accented Iraqi Arabic coming from this character who supposedly blended in seamlessly. Why, the native Iraqi never once suspected that DiCaprio’s character was an American. I was inappropriately embarrassed for him. Probably vicariously feeling shame about my own Arabic speaking skills.

TV Tropes has a page about “faux fluency” here.

I posted about Arabic in movies a while back on this blog. The post is here. Enjoy.

1- Over at Loonwatch they continue to expose Robert Spencer as a fool pretending to be a scholar.

2- Inexplicably popular gasbag Rush Limbaugh bloviates that Muslim contributions to math and science are mostly myths. Link to Media Matters, not Rush’s site. (He also says Barack Obama would be a tour guide except that he’s black, and that’s why he’s president).

3- Loonwatch again, a Muslim girl burned by Christians for being Muslim. In the UK.