This video is good for an infectious laugh. Saturday morning and I already guffawed, so you know it’s good stuff.

The meta humor is that the Arabic title is “Important: Leaked Speech of Bashar al-Assad at the Funeral of Assef Shawkat.”

Bashar is somewhat turkey-like. I’m sure you see it.

Who Do These Two Remind Me Of?

Reading Crooks and Liars I saw this video clip, and seeing the two old dudes sitting upright next to each other reminded me of two other similar characters. 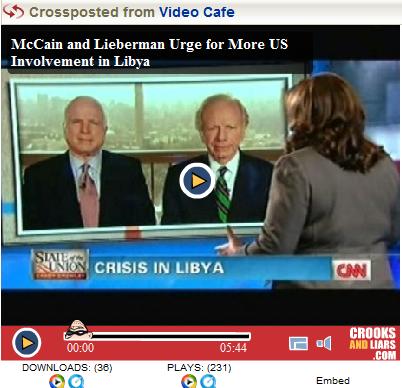 I’m not saying that Statler’s and Waldorf’s views on the Middle East are just as well informed as McCain’s and Lieberman’s, but I am saying they’d be just as welcome at this point. And it’s not about their age, it’s about how many years they’ve been saying stuff that’s just wrong.

Tagged as looks like, McCain and Lieberman, Statler and Waldorf

Here’s a new thing WordPress is doing this year. Very cool! It’s a summary of how my blog did this year. Well, good for me. And I’m hoping I write more interesting stuff in 2011.

The stats helper monkeys at WordPress.com mulled over how this blog did in 2010, and here’s a high level summary of its overall blog health:

The Louvre Museum has 8.5 million visitors per year. This blog was viewed about 160,000 times in 2010. If it were an exhibit at The Louvre Museum, it would take 7 days for that many people to see it.

The busiest day of the year was August 31st with 4 views. The most popular post that day was If They Hate Us, Why Haven’t They Killed Us Yet?.

Where did they come from?

The top referring sites in 2010 were reddit.com, Google Reader, facebook.com, twitter.com, and mantiqaltayr.wordpress.com.

These are the posts and pages that got the most views in 2010.

Tagged as year in review